Almost 6 million viewers watched the Christmas live show “Panariello Under the Tree” on Italian TV channel Rai1, featuring the national star, comedian Giorgio Panariello.
The show was broadcast on December 22-23 from the Modigliani sporting arena, that had been transformed for the occasion with spectacular scenic design and a majestic Christmas tree. The audio system, made with RCF’s Touring and Theatre speakers, was provided by Agorà rental company – also responsible for the rigging structures, lighting and video LED.
A 10-men band and a gospel choir performed during the Italians’ favourite Christmas TV show, hosted by Giorgio Panariello together with several guests, including Hollywood actor, Matt Dillon.
The audio system was made of: • 6 x 12 TTL55-A active three-way line array module, for the terraces and tribunes. The clusters were flown at 14 m height and positioned in a semicircle; • 4 x 6 TTL33-A active three-way line array module, for the stalls. The clusters were flown at 12 m height and positioned around the central platform of the stage, creating a smaller semicircle; • 8 ART 312-A active two-way speaker, positioned under the stage and along the central platform to reinforce the closest areas; • 14 TTS56-A active high-power subwoofers in end fire configuration, under the main stage.
The shape of the stage, with a long platform ending at the centre of the public area, saw the use of several condenser headset microphones in difficult positions, and a cluster height that had to be at least 10 m in order to be out of sight of the cameras. All these factors complicated the task of maximizing intelligibility without impacting negatively on the mic shooting.
The acoustic project was carefully designed by RCF and Agorà technicians, who managed to transform the difficult location of a sporting arena into a TV studio with good audio quality. The audio system was designed with a concentric structure, that allowed the sound to reach the entire audience (around 5000 people) from close points, with accurate tuning in terms of cluster timing. “We started from the closest cluster to the stage and then aligned the following ones, finding the right compromise in terms of delay in the points of maximum overlap,” states Agorà’s PA Manager Antonio Paoluzi.
The result was extremely successful. The sound of the band, the chorus and the guests performing on stage was full and precise, without any reverb. Speech amplification was effective and ensured a constant and pleasant presence of the voices, leaving the TV production team and writers extremely satisfied. The excellent intelligibility, both at low and high volume levels, ensured a free management of the microphones, without annoying feedback.
“We genuinely managed to recreate the acoustic conditions of a TV show,” concludes Paoluzi. “The RCF TT+ system really proved its quality in a sonically difficult environment such as the Modigliani sporting arena.”
Details of PA system: • 6 clusters x 12 RCF TTL55-A • 4 clusters x 6 RCF TTL33-A • 8 RCF TTS56-A sub 21” arc delay • 2 x 4 TTS56-A sub 21” stack 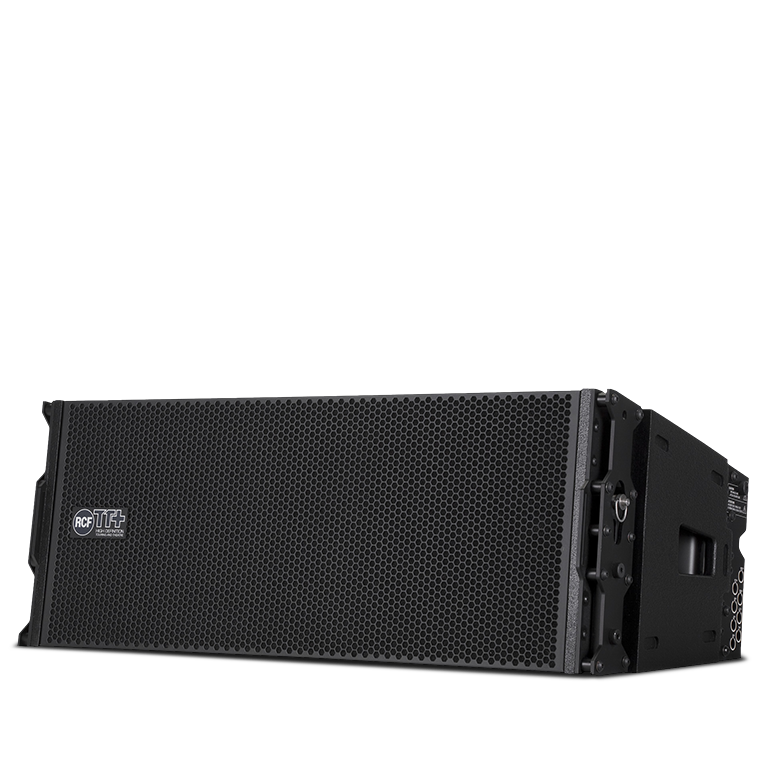